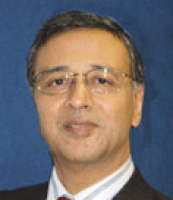 Mr Desai studied medicine at University of Glasgow from1970 to 1975 (MBChB)
After initial training in Surgery in the West of Scotland, and passing his surgical examinations, he became Fellow of the Royal College of Surgeons and Physicians of Glasgow in 1979.
His cardiac surgical training commenced and continued after moving to Hammersmith Hospital in London in 1982. After a further 4 years of training and research he passed the Cardiothoracic Speciality examination and was made a Fellow of the Royal College of Surgeons of Edinburgh in 1986.
Mr Desai was appointed Senior Registrar at Hammersmith, Harefield and Middlesex Hospitals and in 1990, he was visiting fellow at Barnes Hospital (St. Louis, USA) where he learnt surgery for cardiac arrhythmias.
He was appointed Consultant Cardio-Thoracic Surgeon at King’s College Hospital in 1990 where he continues to work today.
He has been trained in Adult and Paediatric Cardiac and Thoracic Surgery and Transplantation but presently practices as an Adult Cardiac Surgeon.

His hobbies are Photography, Computing, Cycling and Treking.