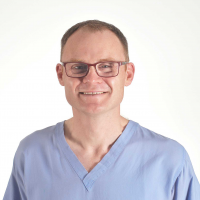 Mr Smith is a Consultant Ophthalmic Surgeon.
After qualifying from the University of Glasgow Medical school he undertook his general ophthalmic training in the South West, Manchester Royal Eye Hospital and Brisbane, Australia. In 2008 he completed a Fellowship in medical and surgical glaucoma at the University of Toronto, Canada. Later the same year he was appointed as an NHS Consultant at the Royal Devon and Exeter Hospital.
Mr Smith is a Fellow of the Royal College of Ophthalmologists and a member of the both the UK and European Societies of Cataract Surgeons. He is a long-term member of the UK and Ireland Glaucoma Society and in 2013 he was elected an International Member of the American Glaucoma Society.
He has a keen interest in training junior doctors and prior to undertaking the clinical lead post at the West of England Eye Unit was the College Tutor, overseeing all aspects of junior doctor training. He is also an experienced researcher with over 20 peer reviewed publications.
Mr Smith is experienced in all aspects of general ophthalmology and has a special interest in cataract surgery and glaucoma. One of the first doctors in the UK to introduce Selective Laser Trabeculoplasty (SLT) into his daily practice he is experienced in all aspects of glaucoma surgery including trabeculectomy, non-penetrating glaucoma surgery, glaucoma tube surgery, endocyclodiode photocoagulation (ECP) and the Xen Glaucoma Implant.