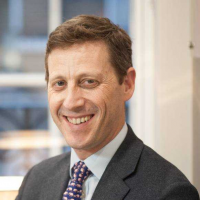 Dr Irving trained in Medicine at Cambridge University and The London Hospital Medical College, qualifying with distinction in 1995. He conducted his research at Barts and The London on inflammatory bowel disease before moving to Australia for a further period of research.

He is internationally known as an expert in inflammatory bowel disease (Crohns disease and ulcerative colitis) and leads the inflammatory bowel disease service at Guys and St Thomas Hospital, London where he also runs a large research and clinical trial programme. He has previously sat on the IBD Section of the British Society of Gastroenterology and Chaired the Education Committee of the European Crohns and Colitis Organisation.

Dr Irving also has a specific interest in irritable bowel syndrome (IBS). Together with dietetic colleagues at Guy's and St Thomas' Hospital and King's College London, he introduced the low FODMAP diet to the UK and continues to conduct research in this field. Overall he has over 130 publications and has published 3 books.


His practice includes all aspects of luminal gastroenterology with a particular interest in inflammatory bowel disease (Crohns disease and ulcerative colitis) and irritable bowel syndrome (IBS). His endoscopic interests include small bowel capsule endoscopy as well as gastroscopy and colonoscopy