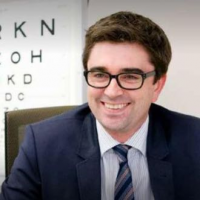 Mr. McCormick graduated from The University of Sheffield Medical School, UK in 1997. His ophthalmology training continued in Sheffield before moving to Liverpool to complete his ophthalmic surgical training. He became a Fellow of the Royal College of Ophthalmologists in 2007 and is included on the GMC Specialist Register (reg. no: 4438005).

He completed 2 Oculoplastic Fellowships each for 1 year: Auckland, New Zealand and Manchester UK. During these he specialised in Oculoplastic, Lacrimal and Orbital Surgery.

He currently works as a Consultant in the NHS at The University Hospital Aintree, a teaching hospital in Liverpool, providing a regional oculoplastic, lacrimal and orbital service.

He is a Fellow of the Royal College of Ophthalmologists (FRCOphth).

He is a member of The British OculoPlastic Surgery Society (BOPSS).