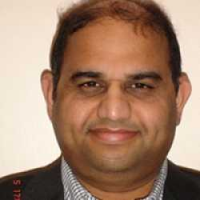 Dr Shankara Paneesha MD FRCP FRCPath is a Consultant Haematologist based at The University Hospitals Birmingham NHS Foundation Trust in Birmingham. He also consults at Spire Little Aston and Spire Parkway Hospitals.
Dr Paneesha graduated from Mysore University in 1993 and obtained a postgraduate qualification in General Medicine from Bombay University in 1996. He completed his specialist training in haematology at the West Midlands Deanery, following initial training at the Royal Free and the Royal Marsden Hospitals in London.
Dr Paneesha undertook a period of research in myeloma and venous thrombosis at Warwick University. He has significant experience in the treatment of haematological malignancies including leukaemia, lymphoma and myeloma, and in investigating thrombosis risk factors, inherited thrombophilia and stem cell transplantation.
Dr Paneesha was appointed as a Consultant Haematologist in March 2007 at the Heart of England NHS Foundation Trust. His main interests are malignant haematology, stem cell transplantation and venous thrombosis, and he has published research in top international haematology journals. Dr Paneesha plays a leading role in a large number of trials in haemato-oncology, either as a principal investigator or as co-investigator at his institution.