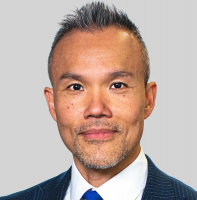 Dr Kwan has been a stroke specialist since 2006. From 2008 to 2010, he was the clinical lead for the regional stroke network; and from 2013 to 2018, he took up an academic position as a clinical associate professor (reader) at Hong Kong University.

He returned to Imperial College London in 2018 as a senior stroke consultant, honorary senior lecturer, and head of original stroke research. He has published over 115 peer-reviewed scientific articles and written book chapters in his specialist fields, and became the first-ever Fellow of the American Heart Association in the UK in 2021.

Dr Kwan welcomes referrals for all problems related to stroke and ageing. He is a strong advocate of the holistic self-care approach to recovery, combining optimal nutrition and physical conditioning to promote well-being of the body and mind.

Outside of work, he is a father of four and has a passion for sports and fitness training.