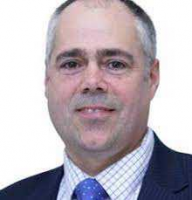 Dr Garcia Alonso is a senior Consultant Clinical Oncologist based in North Wales. He completed his general medical training and Oncology training in Spain and England before moving to Wales in 2005. He joined North Wales Cancer Centre in 2005.

Dr Alonso was appointed as a Consultant Oncologist in 2005, specialising in the management of lung (non-small cell, small cell, mesothelioma),Gastrointestinal (Oesophageal,Gastric,Hepatibiliary and Pancreatic) cancers and Haematological Cancers. His NHS practice is based in North Wales, with clinics in The North Wales Cancer Centre and Wrexham Maelor Hospital.

Dr Alonso participates in a large number of clinical trials in both lung and gastrointestinal cancer sites, and has published extensively in these fields.

He is responsible for prescribing and supervising the administration of Chemoradiation, Radiotherapy, Cytotoxic Chemotherapy ,hormone therapy ,Immunotherapy and Anticancer Target Therapy.