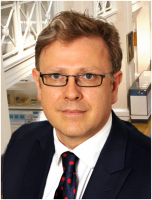 Mr Black graduated from Queen’s University of Belfast medical school in 1993 and underwent his registrar training in ENT surgery at Guy’s, St Thomas’ and Great Ormond Street Hospitals. He attended the Memorial Sloane Kettering Hospital, New York and the European Hospital Georges Pompideau, Paris in his final year of training to further his training in thyroid surgery. In 2006 Mr Black was appointed as Head & Neck Fellow, Christchurch Public Hospital and Senior Lecturer to the University of Otago Medical School, New Zealand for 1 year until his return to the United Kingdom as Consultant Ear, Nose and Throat (Otorhinolaryngology) and Thyroid Surgeon to East Kent University Hospitals Foundation Trust in 2007. In 2014 Mr Black was appointed as Consultant ENT / Head & Neck / Thyroid surgeon to the Royal Victoria Hospital, Belfast. In 2015 Mr Black was appointed as Training Programme Director for ENT training for Northern Ireland.

Mr Ian Myles Black was awarded his first Fellowship by the Royal College of Surgeons of Edinburgh in 1999 (FRCS (Otol.) and his second in Head & Neck Surgery (FRCS ORL-HNS) in 2005. Mr Myles Black is fully trained in all aspects of Ear, Nose and Throat (ENT) surgery with extensive experience both in paediatric and adult ENT disease. His subspecialist interests are thyroid, salivary gland, voice, paediatric, snoring and sinus surgery.

Information is collated with the 108 Medical Chambers team