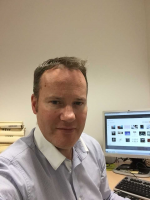 John McDonald graduated from the University of Glasgow in 1994. He obtained both his medical degree and a 1st class BSc (Hons) in Biochemistry. He became a member of the Royal College of Physicians in 1997. Following a period of research in heart failure he trained in Cardiology in the West of Scotland rotation, based in Glasgow. This rotation led to training in all aspects of general cardiology but with special interest in interventional cardiology, heart failure, pacemaker implantation, transthoracic and transoesophageal echo and management of ischaemic heart disease, arrhythmia and hypertension.

In 2005 he undertook a year long international interventional fellowship based in Vancouver Island in British Columbia, Canada. This gave him intensive experience in transradial percutaneous coronary intervention (PCI), intravascular ultrasound (IVUS), laser and rotational atherectomy and primary PCI. He performs the majority of his interventional cases transradially as this offers better patient comfort and reduced risk of bleeding. During this time he also undertook research into prevention of in-stent restenosis and published and presented this work at both national and international level.

John has worked briefly as a consultant in Glenfield Hospital, Leicester and now as an Interventional Consultant Cardiologist in Blackburn Royal Hospital in Blackburn since 2007. He has contributed to the significant changes in the delivery of cardiac care for East Lancashire. He does approximately 600 angiograms/angioplasty procedures and 100 pacemaker implants per year. His annual inpatient and outpatient workload is in excess of a 1000 patients and includes all aspects of clinical cardiology. He specialises in complex coronary interventions such as left main, rotational atherectomy and chronic total occlusion procedures. He is a highly regarded operator and is regularly asked to present at national meetings on these subjects. He is also asked by local centres to proctor other operators.