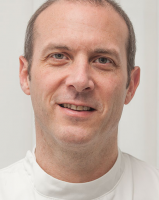 Simeon Hempsall (BSc Hons) was born and bred in Sheffield. He went to the British School of Osteopathy in London where he graduated in 2001.

He is a former professional cyclist and has competed in a number of major sports events including the 1992 Barcelona Olympics and 1994 Commonwealth Games. He also won the National Road Racing Championships.

Simeon is now married with three children (all girls!) and maintains a keen interest in sport – treating many varied sports injuries at the Active Healthcare Clinic (which was established in 1987). He is passionate about helping each individual to achieve their optimum health and fitness levels through Osteopathic practice.

He also treats many other ailments including: lower back pain; mid to upper back pain; and neck and shoulder pain, among other things.