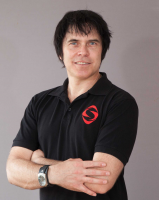 Simon trained as a physiotherapist from 1992, graduating with honours in 1996 from King’s College University, London. After completing his junior rotations through the different specialities at the Royal Free Hospital, London, he specialised in outpatient physiotherapy (spinal pain/dysfunction; joint problems and other musculoskeletal injuries including sports injuries) in the private sector for 6 years. During this time he began his progression to becoming a Clinical Specialist Physiotherapist as well as gaining further post graduate qualifications in Sports Physiotherapy from the Manchester Metropolitan University. He also furthered an interest in analysing movement patterns and coaching of enhanced motor control with formal training (Kinetic Control).

After a career break travelling around the world, with further post graduate training he became a Clinical Specialist and eventually a Clinical Director at Back in Action UK, London. He completed an MSc. in Neuromusculoskeletal Physiotherapy, with merit, at Keele University in 2013. This qualification also elevated him to being a Kinetic Control Movement Therapist, a method to analyse and correct movement patterns. During his time at Back in Action and more latterly back at the Princess Grace Hospital, London, he worked with more clients without traditional physiotherapy problems but who required specific fitness coaching or health and wellbeing coaching. He also treated more complex rehabilitation clients and those with chronic pain, often referred to him by junior colleagues. His post graduate training (other than his formal University qualifications) reflected this alteration to his client group with training on diet, hydration, refuelling/rehydration, strength and power training, cognitive behavioural therapy, endurance training and the psychology of athletic performance.

Merit award for my MSc.
Inaugural employee of the Year at Back in Action 2011.

Exercise based physiotherapy - the benefits to your patients.

I can be contacted directly using Skype. My Skype ID is: superfit_1