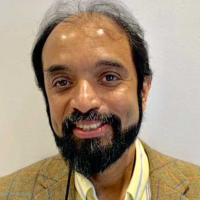 Dr Johnson Samuel has been a Consultant Respiratory Physician at Basildon University Hospital from 2004. He is the Director of Medical Education and the Lead for Pulmonary Physiology, Sleep Medicine & Ventilation in the Trust.

Dr Samuel graduated from the Christian Medical College & Hospital, Vellore, India with an MBBS and MD, General Medicine. After higher specialist training in Respiratory Medicine in Wales, he moved to Basildon. He became a Member of the Royal College of Physicians in 1998 and was elected a Fellow in 2008. He obtained a Postgraduate Certificate in Medical Education (UCL/RCP) in 2009 and has been a Fellow of the Higher Education Academy since 2010.

His specialist interests are in Sleep medicine and Pulmonary Physiology. He has developed the Cardio-pulmonary exercise service, which is used widely by physicians, surgeons and anesthetists across the region. He sees patients with a wide range of respiratory disorders including COPD, Asthma, Lung Cancer, chronic cough, breathlessness, respiratory infections and interstitial lung disease. He performs fibreoptic flexible diagnostic bronchoscopy and other general respiratory procedures. He presents regularly at national & international conferences, has publications in peer-reviewed journals and has authored chapters in a respiratory textbook.