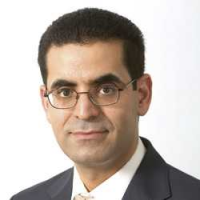 Dr Ahmed El-Modir completed his training in oncology in the West Midlands and was appointed as a consultant oncologist at University Hospital Birmingham in 2003.

He is an honorary senior lecturer with Birmingham University. He is also a visiting oncologist to the Heart of England NHS Foundation Trust and Sandwell and West Birmingham Hospitals NHS Trust.

Dr El-Modir specialises in the treatment of cancer with chemotherapy, radiotherapy and immunotherapy. He is the principle investigator for a number of national trials. He has a special interest in advanced radiotherapy treatments including brachytherapy, image-guided IMRT, stereotactic ablative radiotherapy (SABR) and cyberknife..