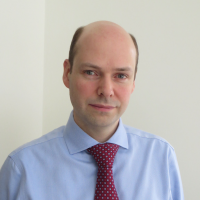 Mr Booth studied Medicine at the University of Southampton, qualifying in 1994. He trained in Ophthalmology in the South Thames and Wessex regions, completing specialist training in medical retinal conditions at Southampton.

He was appointed as a Consultant Ophthalmologist at Queen Alexandra Hospital, Portsmouth in 2004 where he undertakes cataract surgery, general and medical retinal clinics. He has developed a highly successful service offering the latest treatments for macular diseases, including Intravitreal Lucentis, Eylea and Ozurdex. His macular degeneration service was nominated for a Macular Society Excellence Award in 2013 and 2014.

Mr Booth has a undertaken a number of roles within the department including College Tutor, overseeing training of junior eye surgeons at Queen Alexandra Hospital, and Clinical Director of the Eye Department. He has been one of the leads driving the expansion of research activity in the Eye Department, acting as Principal Investigator on a number of key trials in medical retinal eye disease and recruiting an enthusiastic team of research staff.