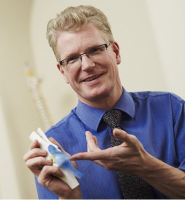 Steen Sorensen grew up in Denmark, a country that recognises the value of chiropractic treatment and funds it through its NHS system.Having always wanted to be a chiropractor, Steen moved to England in 1983 to study the profession, as there were no training colleges in Scandinavia at that time. He trained at the Anglo-European College of Chiropractic in Bournemouth and graduated four years later in 1987.

Steen spent his first two years as a chiropractor at clinics in New Zealand. He then returned to the UK to work in York and Oxford, whilst completing his post-graduate studies in applied kinesiology and SOT. Before long, the travel bug had struck again and Steen relocated to Cape Town in South Africa.

Two years later Steen returned to York, where he spent the next two years establishing his reputation as a chiropractor. After taking a year out to travel Europe, he settled into Yorkshire life, working as a locum before launching the Chiropractic Plus clinics in Haxby and Pocklington.

Chiropractic Plus has grown over the years with the addition of Carol Latto in 2002, initially as a chiropractic associate and latterly as Steen’s wife. The duo currently work alongside associate chiropractors Alex Tierney and Kristian Araneda.

Steen said: “Whilst working in New Zealand, I was fortunate enough to spend time at a clinic that treated many paediatric chiropractic patients. This sparked an ongoing interest in the treatment of babies and young children. I also specialise in sudden onset, acute back problems and enjoy the rewards of working with elderly patients.”

Outside work Steen has a busy family life. When he does have a spare moment, he likes to watch films, read books and listen to music – often at the same time! Weather permitting, he also enjoys escaping on his motorbike.