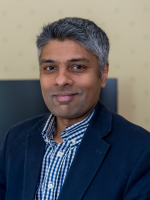 Hari is a Consultant Urological Surgeon specialising in the medical and surgical treatment of urinary tract stones. He was appointed as a Consultant Urological Surgeon at the Royal Derby Hospital in 2010. After 3 years in Derby, he joined the Urology department at Nottingham City Hospital, where he has been working since June 2013. He has extensive experience in various innovative surgical procedures for kidney stones, including mini-PCNL, ureteroscopy and holmium laser surgery for stones, and he performs high numbers of all these procedures in his NHS practice. ‘He has a particular interest in patients who have formed recurrent kidney stones to try and establish the underlying reasons for this in order to attempt to prevent further painful episodes of stone disease.

Hari constantly strives to improve outcomes of treatment for all patients with kidney stones and participates actively in a number of national audits and research projects. Hari is also a member of the British Association of Urological Surgeons (BAUS) section of Endourology executive committee, and has spoken about the diagnosis and management of stone disease at national and international medical conferences. He has contributed towards national guidelines for the management of urinary tract stone disease.

Hari has a broad interest in the diagnosis and treatment of general urological conditions including enlarged prostates, blood in the urine (haematuria) and scrotal lumps and bumps.

Hari studied at Nottingham University Medical School, graduating with first class honours in 1998. He trained in general surgery and urology in Nottingham, Derby and Leicester. He has always had a strong interest in academic research and was awarded a prestigious national scholarship and a DM degree for his research into prostate cancer. He remains actively involved in cancer research, and is an Honorary Assistant Professor at Nottingham University. He maintains an active role in teaching and training the next generation of Urologists and is currently BAUS national lead for Specialist Trainee education.