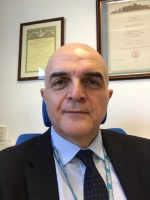 He has been an active Consultant Cardiac Surgeon since 2002 and has performed so far >3500 surgical procedures (survival >99%) with >90% of his surgical practice benefiting from new interventions he has validated in >15 phase I&II trials and >10 case cohort studies in the NHS in the areas of innovative surgery, diabetes as surgical risk, and reducing postoperative complications.

He is the recipient of the National Clinical Excellence Silver Award since 2013 for his outstanding clinical performance, the Garfield Weston Trust Senior Lectureship in Cardiac Surgery (2003-08), the Fellowship ad eundeum by the RCSE in 2004, the Master of Surgery by University of Bristol in 2002, the John Parker Gold Medal by the SCTS in 2001, and he was part of the Bristol team awarded the “Surgical Team of Year - 1st Prize” by UK Hospital Doctors in 2005.

Professor Ascione has £54M in grants and capital bid awards as PI or co-PI, > 240 publications including 200 Google Scholar-censed publications, 2 patents, 7 book chapters, 32 refereed Conference Contributions, 21 Reviews and Editorials. His research has inspired others with > 8400 citations; H-Index: 47 (Google Scholar). Significant international media interest with >40 reports including the BBC, The Times, The Washington Post.
His surgical performance is audited yearly and is available on this SCTS web page.

The list of my publications is available at:
https://scholar.google.com/citations?user=5CWyR24AAAAJ&hl=en

Professor Ascione has been an active Consultant Cardiac Surgeon since 2002 and has performed so far >3500 surgical procedures (survival >99%).