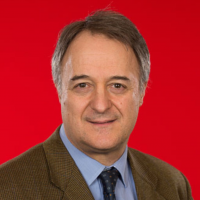 Luigi Gnudi obtained his MD with Honours from the
University of Parma (Italy) in 1988. He subsequently
joined the residency programme in Diabetes and
Endocrinology at the University of Padua Medical
School - Italy (1989-1993). During 1992-1995 he
worked as a postdoctoral fellow with Prof Barbara B
Kahn at Beth Israel Hospital, Harvard Medical School in Boston. In 1999 he obtained a PhD in Endocrinological Sciences from the University of Milan and in 2005 he became a Fellow of both the Royal College of Physicians and the American Society of Nephrology.
In 1997 Luigi Gnudi was appointed Senior Lecturer in the Unit for Metabolic Medicine within the Cardiovascular Division of King’s College London School of Medicine, and in 2011, was promoted to Professor of Diabetes & Metabolic Medicine. He has been Head of the Unit for Metabolic Medicine since 2010. He is an Honorary Consultant Physician in Diabetes, Endocrinology and Metabolic Medicine at Guy's and St Thomas' Hospital NHS Foundation Trust in London.
Luigi Gnudi is subject editor for Nephrology Dialysis and Transplantation, Metabolism, Journal of Endocrinological Investigation, and the Journal of the
American Society of Hypertension. He is a member of Diabetes UK, European Association for the Study of Diabetes, American Diabetes Association, American
Society of Nephrology, European Diabetic Nephropathy Study Group, Physiological
Society, ERA-EDTA, and Faculty 1000.
He speaks frequently at national and international meetings and is an active researcher, clinician, and teacher with major research interests in the study of diabetic nephropathy and diabetic vascular complications in man. He has published more than 70 original papers, books and monographs and meeting proceedings on these topics