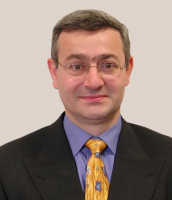 Mr Mazin Sayegh is a Consultant General Surgeon. His main interests are Gastrointestinal and Laparoscopic (keyhole) surgery including gallbladder and pancreatic diseases and surgery, oesophageal and stomach surgery, anti-reflux surgery. He also has special interest in hernia surgery, particularly complicated and recurrent hernias.

He carries out endoscopy (fibre optic camera), including upper GI endoscopy, colonoscopy, endoscopic Ultrasound scan and has a special interest in endoscopic mucosal resection of lesions,

Mr M Sayegh qualified in 1984 and obtained his Master degree from Keele University in 1993. He gained his fellowship from the Royal College of Surgeons of England in 1995. His General Surgical & laparoscopic experience was expanded in the UK and Europe and later on in Tokyo, Japan where he culminated his advanced surgical experience in diseases of the Gastrointestinal Tract and Laparoscopic Surgery.

Since the introduction of laparoscopic (keyhole) surgery, Mr. Sayegh has focused his practice on procedures conducted using these minimally invasive techniques. He has worked with various national, European and international colleagues on gastrointestinal tract surgery, hepatobiliary and hernia surgery.

Mr Sayegh is a member of various national and international associations and societies and currently is a member of the court of examiners of the Royal College of Surgeons of England and Member of the Panel of Examiners for the intercollegiate speciality Board in General Surgery . He has published in various peer reviewed journals and gave talks at local, national and international meetings. His hobbies include painting (oil and watercolour) cycling and listening to music.

• Member of the European Association for Endoscopic Surgery (EAES).

• Member of the British Hernia Society.

• Member of the court of examiners of the Royal College of Surgeons of England.

• Previous member of the American Society for Gastrointestinal Endoscopy (ASGE).