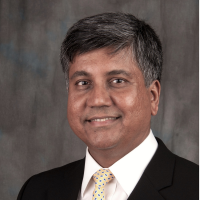 Professor Abhay Rane was appointed an Officer of the Order of the British Empire in the New Year 2014 Honours List for services to urology.

Professor Rane has been a Consultant Urological Surgeon at Surrey and Sussex NHS Trust for the last 20 years. He is Professor of Urology at the Keck School of Medicine, University of Southern California, the Icahn School of Medicine at Mount Sinai, New York, and Visiting Professor, Canterbury Christ Church University. He was one of the first laparoscopic urological surgeons in the United Kingdom. Instrumental in developing the technique of hand assisted laparoscopic nephrectomy in the UK from 2000, he was the first to described the usefulness of the technique in T3b (advanced) kidney cancers. More recently, he spearheaded the development of laparoendoscopic single site surgery (LESS) in urology as a pioneer and innovator. Having performed the first single port nephrectomy in May 2007 with colleagues in India, he went on to perform the first LESS nephrectomy in Europe in March 2008 at East Surrey Hospital, Redhill. He has been invited to share his experiences at a number of sessions at various cross specialty international meetings, including the American Urological Association and Society of American Gastrointestinal and Endoscopic Surgeons.

Over the last eighteen years, Professor Rane has mentored laparoscopic skills to other consultants. As a result, of his efforts 18 hospitals in the UK now have a local laparoscopic urology programme. His work on training in laparoscopy has been presented, published and cited extensively.

Professor Rane is elected as Vice President of the Royal College of Physicians and Surgeons of Glasgow and was an elected member of Council of the British Association of Urological Surgeons;

He regularly supervises MSc students. A tutor on the MSc and FRCS (Urol) courses, he serves as an examiner of the Intercollegiate Membership of the Royal College of Surgeons and FRCS(Urol) exit examination for British urologists in training.

He has conducted a number of British, European and North American symposia/masterclasses in laparoscopic surgery as Course Director.

He is current chairman of SLUG (Southern Laparoscopic Urology Group), a peer review group, to promote safe laparoscopic urological practice. Current Co-Chairman of the LESS and NOTES Working Group of the Endourological Society, he also is a member of the Awards Committee.

He was Chairman of the Surrey, West Hampshire and Sussex (SWSH) Cancer Network until 2017.

Professor Rane has worked closely with Guy’s Hospital, London for the Simulation and Technology-enhanced Learning Initiative since 2009.

He is a member of the Advisory Board, Center for Robotic Surgery and Institute for Prostate Cancer, James Buchanan Brady Foundation, New York. An advisor to the National Institute of Clinical Excellence (NICE) on laparoscopic urology, he was national urology lead on the NICE Interventional Procedures Advisory Committee.

Professor Rane was elected to the Board of the European Section of Uro – Technology (ESUT) of the European Association of Urology.
In 2015, he hosted, as President, the very successful World Congress of Endourology in London, the largest urology meeting in the UK to that date.

Professor Rane has over 140 publications in several peer-reviewed journals, 4 book chapters and has edited 7 textbooks in urology; in addition, he is credited with over 200 presentations in national and international meetings.