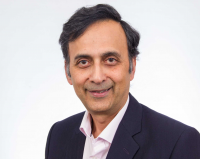 Vijay Ramani was appointed as a Consultant Urological Surgeon at ManchesterUniversity Hospitals NHS Foundation Trust and The Christie, Manchester since 1999. His specialist interest is in prostate, bladder, renal, testis and complex pelvic and retroperitoneal cancers. He leads the Robot Surgery Users Group at The Christie and has also been responsible for the introduction and advancement of robotic surgery at The Christie (first robot in North of England -2007) and regularly undertakes robot assisted laparoscopic prostatectomy (robotic prostatectomy) on patients with localised adenocarcinoma prostate. He has performed in excess of 1000 Robotic Prostatectomies for cancer prostate. He also carries out Robotic partial nephrectomy. He is a recognised National / International perceptor in robotic surgery and has trained other specialist urological surgeons in this surgery. He also undertakes targeted biopsy of the prostate via transperineal route and mapping biopsy of prostate

He is a Lecturer of the European School of Urology. He has given many lectures both regional , nationally and internationally on Urological cancers and regularly recruits patients to trials through the specialist MDT set up. He also consults on the prostate and issues surrounding men’s health.

Leads The Christie as an accredited training centre in Robotic Surgery

several as on pubmed