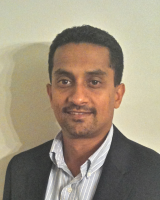 Anups de Silva is Consultant Gastroenterologist based at the Norfolk and Norwich University Hospital where he is Lead Clinician for the Inflammatory Bowel Unit.

He trained at University College London, qualifying in 1993 with Honours, winning several awards and scholarships including that for Greatest Overall Proficiency in his year. His specialist training was carried out in London, including at the Royal London Hospital and Royal Free Hospital. He was awarded the Leslie Parrott Research Grant from Crohn's and Colitis UK for his research into aspects of inflammatory bowel diseases, whilst based at the Digestive Diseases Research Centre at Queen Mary, University of London.

He was appointed Consultant Gastroenterologist and Physician in 2004. He attained the status of Fellow of the Royal College of Physicians of London in 2009. Along with IBD, his special interests include therapeutic colonoscopy, Endoscopic Retrograde Cholangiopancreatography (ERCP). He is Honorary Senior Lecturer at Norwich Medical School, University of East Anglia.

He is an accredited National Bowel Cancer Screening Program colonoscopist.

He has four children who ensure he is kept even busier at home than at work.

Any aspect of gastroenterology