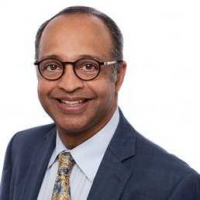 Mr Abhi Parikh is a Consultant Ear, Nose & Throat surgeon at St. Mary’s Hospital, Paddington in London, which is part of Imperial College Healthcare NHS Trust. It is one of the first Academic Health Science Centers in UK. Mr Parikh qualified from University of Mumbai, India in 1982. He specialised in ENT surgery (Master of Surgery) from the same university in 1987, and decided to pursue further studies in the UK.

In UK his postgraduate training centered around the Royal National Throat, Nose & Ear Hospital. From 1996 to 1998 he undertook a research post with Dr Glenis Scadding, which led to a degree of Doctor of Philosophy (PhD) from the University of London. He continued his surgical training in ENT from 1998 onwards, and became a Consultant at St. Mary’s Hospital in 2003. He is a member of the British Medical Association (BMA) and ENT UK, which is a national association of UK ENT surgeons. During his career he has pursued an active interest in research with several publications in peer reviewed journals.

Mr Parikh has published several papers in peer reviewed journals. His papers have been accepted for publication in notable high impact factor journals such as New England Journal of Medicine, Lancet, and British Medical Journal amongst others.