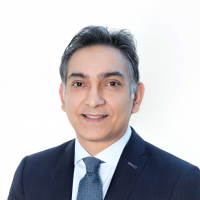 Dr Roby Rakhit qualified in 1991 from Charing Cross & Westminster Medical School, University of London, with a first class honours degree in Pharmacology. He began his general cardiology training in 1995 as a rotating Cardiology Registrar (fellow) at the Hammersmith, Royal Brompton and St. Marys hospitals. In 1998, funded by the Wellcome Trust, he completed a two-year doctorate (MD thesis) at the Rayne Institute, St.Thomas` Hospital on the cellular physiology of nitric oxide in conferring myocardial protection against ischaemia.

In 2000 he was awarded a prestigious British Heart Foundation International Fellowship where he undertook further advanced interventional training at the Swiss Cardiovascular Centre, Bern under the supervision of Prof. Bernhard Meier. In 2004 he was appointed as Consultant Cardiologist to the Royal Free Hospital & Honorary Senior Lecturer at University College London. In 2008 he was elected to fellow of the Royal College of Physicians. In 2018 he was promoted to Associate Professor of Cardiology at UCL and elected to Fellow of the European Society of Cardiology. He was formerly clinical director and head of of cardiology at the Royal Free and contributed significantly to service improvement.