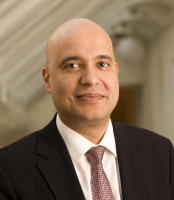 Mr Guri Sandhu MBBS, MD, FRCS, FRCS (ORL-HNS) graduated from the University of London in 1990 having trained in Medicine at The Royal London Hospital. As a Registrar he trained in ENT at The Royal National Throat, Nose and Ear Hospital and in Paediatric ENT at Great Ormond Street Hospital for Children. He obtained the Intercollegiate Fellowship in Otolaryngology (FRCS ORL-HNS) in 2001 and a Doctorate of Medicine (MD) in 2011. Mr Sandhu has over 120 peer reviewed research publications and has written 15 book chapters and 2 books. He lectures nationally and internationally and has an active research programme in laryngology.
He has been awarded fellowship of the American Laryngological Association and honorary fellowship of the Royal Academy of Music. He is the only ENT surgeon in the UK to hold these awards, and they are in recognition research, education and management of throat problems and the professional voice. He was the fourth recipient of the Isshiki prize, given every tow years, to surgeons who have made and outstanding contribution to laryngology.