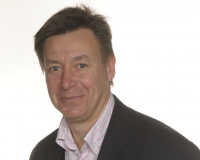 Paddy Stone is Professor of Palliative Medicine at UCL. He was educated at Wimbledon College, Gonville and Caius College, Cambridge and St Bartholomew’s Hospital, London. He qualified in 1990, obtained the MRCP in 1993 and his MD in cancer-related-fatigue in 1999. He was appointed as a Senior Lecturer in Palliative Medicine at St George’s University of London and an Honorary Consultant at St George’s Hospital NHS Trust in 2001. He was appointed Head of the Marie Curie Palliative Care Research department and honorary consultant at University College London Hospitals in 2014.

His research interests include the mechanisms and management of cancer-related fatigue, prognostication in advanced cancer and quality of life and symptom assessment. He is the Chief Investigator on the Prognosis in Palliative care Study (PiPS) II, a national NIHR funded study of prognosis in advanced cancer.