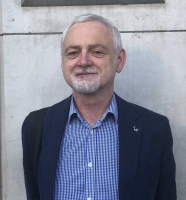 Dr John O'Donohue is a Consultant Gastroenterologist based in London. He qualified in 1987, having been awarded the Blaney Gold Medal for First in Medicine and Psychiatry from St James' Hospital Medical School, Trinity College, Dublin, Ireland. He undertook his specialty training in London at the Liver Unit, King's College Hospital, and St Bartholomews' and the Homerton Hospitals. He completed gastroenterology training as a Senior Registrar at the Western Infirmary, Glasgow. Having been appointed as a consultant gastroenterologist in the NHS in London in 1998, he was awarded Fellowship of the Royal College of Physicians, London, in 2001.

Dr O'Donohue has a comprehensive gastroenterology practice dealing with a wide range of diseases, both of the upper and lower digestive tract. He has expertise in the investigation and treatment of patients who have symptoms of indigestion, heartburn, diarrhoea, bleeding in the bowel, bloating and constipation. He specialises in irritable bowel syndrome, food intolerances, gluten allergy (coeliac disease), and inflammatory bowel disease.
Dr O’Donohue has a special interest in screening and early diagnosis of bowel cancer and treatment of polyps. He is the lead colonoscopist for the NHS Bowel Cancer Screening Service in London. He is one of a minority of gastroenterologists accredited to perform colonoscopies in the Bowel Cancer Screening Program.

He has a major interest in endoscopy. He performs high-quality, safe and comfortable colonoscopy, offering patients a choice of sedation or analgesia alone. He is also a specialist in removal of polyps where required (polypectomy), including removal of large polyps, for which he receives referrals from other endoscopists.

He also performs gastroscopy, ERCP (endoscopy of the bile ducts) and video capsule endoscopy (of the small bowel).

He is also involved in assessment, training and accreditation of endoscopists, endoscopy units and bowel cancer screening centres for the Joint Advisory Group in Endoscopy, both in the UK and internationally.

Dr O'Donohue was awarded the Blaney Gold medal for First in Medicine, St James' Hospital, Trinity College School of Medicine, University of Dublin, in his Final Medical Examinations in1987.

He was awarded a Level 9 (National Scale) Clinical Excellence Award by the Department of Health in 2011 which was renewed in 2015.

High patient satisfaction scores, both in the professional comptence domain (diagnostic and procedural skills) and also for communication skills ('understanding', 'empathetic' and 'a good listener').

My colonoscopy outcomes are in the highest 10%, including for comfort, where over 90% of my patients experience no, miinimal or mild discomfort during the procedure, reducing or eliminating the need for sedation. ERCP cannulation and complications rate also in the top 25%.