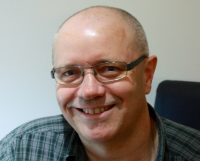 Mr Andy Nordin is a surgical gynaecological oncologist in East Kent and Honorary Senior Lecturer at University College London. Andy was born in Adelaide and studied medicine at the University of Adelaide. He left Australia in 1990, and after working as a rural general practitioner in Somerset, Andy completed general Obstetrics &Gynaecology training posts in Taunton, Basingstoke, London and Newcastle, before serving his subspecialty gynaecological oncology fellowship with in Gateshead.

Andy served as national lead for gynaecology for the Cancer Services Collaborative / NHS Improvement for 10 years, developing his interest in clinical service improvement and redesign. From 2004 until 2014 he chaired the UK's national forum of gynae oncology clinical leaders (The NSSG Leads Group), and from 2007 until 2015 he chaired the National Cancer Intelligence Network (NCIN) Gynaecology Clinical Reference Group. From 2013 until 2016 Andy chaired the British Gynaecological Cancer Society (BGCS) Commissioning Group, and he was elected President of the BGCS for a three year term from 2016 to 2019. He is a trustee of Jo's Cervical Cancer Trust, and clinical advisor for Ovacome, Target Ovarian Cancer, Jo's Cervical Cancer Trust, The Eve Appearl and MacMillan Cancer Relief.

Andy sits on the trial management group and steering committees of a number of national clinical trials and audits. Andy’s research interests also include quality of life questionnaires and cancer survivorship patient reported outcome measures (PROMS), and he has been an active member of the EORTC Quality of Life Group for more than 15 years. Andy jointly led the UKGOSOC surgical outcomes and complications audit project, and is the English representative on the ovarian cancer clinical committee for the International Cancer Benchmarking Partnership.