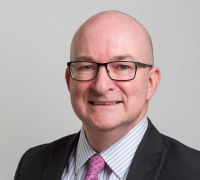 Mr Middleton is a highly experienced surgeon and is the most senior colorectal surgeon in any of the Reading hospitals.
He completed his general surgical training in the South Thames (West) region. His sub-specialty training is in colorectal surgery, in which he completed his Certificate of Completion of Specialist Training (CCST) in 2000. He was awarded a Master of Surgery (MS) following the publication of his thesis on research into aspects of hereditary bowel cancer carried out during a two year period at St Mark's Hospital at Northwick Park in Harrow. This publication was recognized as a work of an international standard.
In 2001, he was appointed as Consultant General and Colorectal Surgeon in Berkshire where he runs an extensive practice in the management of disorders of the colon, rectum and anus. He specialises in the treatment of bowel cancer, inflammatory bowel disease and all anal and rectal disorders such as fissures, fistulas and abscesses, as well as general surgical conditions including all types of hernia and gallstones, including laparoscopic (keyhole) surgery. He is fully trained in laparoscopic (keyhole) colorectal surgery and undertakes the majority of the most complex pelvic colorectal surgery in the Reading area.
He is highly experienced in diagnostic procedures including OGD (endoscopy), flexible sigmoidoscopy and colonoscopy.
Mr Middleton’s special interest is in the modern management of haemorrhoids (piles) and he is Medical Director of the British Haemorrhoid Centre and the Reading HALO centre, based at Spire Dunedin Hospital, which specialise in safe, effective and pain-limited pile surgery. As such, he was responsible for the successful introduction of the haemorrhoidal artery ligation operation (HALO, HAL-RAR) to the UK, the most modern technique in the management of haemorrhoids. He has the greatest experience of any UK surgeon in HALO and HAL-RAR and established the UK's first HALO training centre in Reading, Berkshire. As National Training Director, he trains consultant surgeons from around the United Kingdom in the techniques. He has presented his work on HALO and HAL-RAR nationally and internationally and published in peer-reviewed journals. He treats patients from the Reading area and receives referrals from Berkshire, nationally, and internationally, to provide a specialist opinion and treatment. A comprehensive database of treated patients reflects the excellent outcome from the procedure. One of his patients appeared in the national press and on television's This Morning to describe the procedure and successful outcome.He has now introduced a further minimally-invasive procedure for the treatment oh haemorrhoids using radio-frequency ablation (Rafaelo)

Mr Middleton is general surgical representative to Dunedin Hospital Medical Advisory Committee and is Clinical Lead for the department of General Surgery at the Royal Berkshire hospital. He is also Chairman of the Enhanced Recovery Programme and is honorary Senior Lecturer, University of Oxford. He examines medical students at the University of Oxford, and surgeons in training at the Royal College of Surgeons in the UK and internationally.