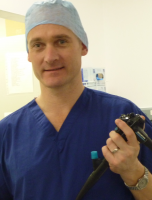 Having qualified from King’s College Medical School, University of London in 1989, I trained in general medicine and gastroenterology at the Queen’s Medical Centre, Nottingham. Specialist training and research in liver disease and liver transplant medicine was undertaken at the Institute of Liver Studies, King’s College Hospital, London.

I have a special interest in irritable bowel syndrome, inflammatory bowel disease, chronic liver disease and gastrointestinal endoscopy. I have carried out over 10,000 endoscopic procedures and routinely train both trainee and experienced endoscopists.

I take a very active role in the development of gastroenterology and hepatology at the Princess Royal University Hospital, Farnborough and Bromley Primary Care Trust as part of my role as Lead Clinician for Gastroenterology Services, King's College Hospital NHS Foundation Trust.


I am interested in novel endoscopic techniques such as wireless capsule endoscopy which involves swallowing a "pill camera" which produces a 12 hour recording of the entire small intestine. This service is available at Chelsfield Park and Sloane Hospitals.
We have recently introduced a "colon capsule" at the Sloane Hospital which is an alternative to endoscopic colonoscopy in some patients.

IBS (irritable bowel syndrome) is a particular interest to me and I always prepared to discuss the role of alternative therapies in addition to standard treatment.
I am currently leading a National Institute of Clinical Excellence funded project to develop new pathways for patients with IBS in the Bromley District.
I also contribute regularly the development of gastroenterology guidelines and pathways for the South East London Sector

In 2011, I was accepted as Examiner for the Royal College of Physicians, UK.

I have published articles in peer reviewed journals on these topics and has carried out over 10,000 diagnostic and therapeutic endoscopic procedures.

Outcomes for all my endoscopic procedures carried out for NHS and private practice are audited 3 monthly.
My results reach the recommended British Society of Gastroenterology Joint Advisory Group key quality indicator targets and are well above the national average.