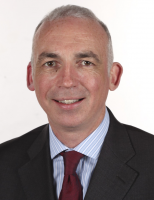 Professor Andrew Veitch is one of the UK’s leading gastroenterologists, with a national and international reputation in teaching, and development of guidelines for better clinical practice. He has been practicing gastroenterology as a consultant for more than 20 years. In Wolverhampton. He has been instrumental in developing a centre of excellence in endoscopy, and has a general gastroenterology and hepatology practice. He set up and runs the first bowel cancer screening centre in the UK. He is Honorary Professor of Gastroenterology at the University of Wolverhampton, and has more than 70 publications.
Nationally he is President Elect of the British Society of Gastroenterology, and internationally is leading on quality improvement in endoscopy services for the European Society of Gastrointestinal Endoscopy, He has a global leadership role as a member (former chair) of the endoscopy committee of the World Gastroenterology Organisation.