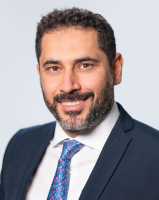 "Mr Tarek Abdel-Aziz passed with distinction in both surgical and medical specialities when he graduated from medical school in 2001. He was then accepted into a highly competitive general surgery residency programme.

Mr Abdel-Aziz completed his MD degree at University College London (UCL) where his research focused on stem cells and organ regeneration . Following a successful thesis defence, he went onto undertake a prestigious Endocrine Surgery fellowship at Oxford University Hospitals. Having been broadly trained both in UCL Hospitals and Oxford, Mr Abdel-Aziz's performs the enitre range of Endocrine Surgery procedures including thyroid cancer, adrenal operations and keyhole and open parathyroid.

Mr Abdel-Aziz is chairman of the Thyroid cancer multidisciplinary meeting at UCL Hospitals, as well as a fellow of the Royal College of Surgeons of England and a full active member of the British Association of Endocrine and Thyroid Surgeons (BAETS). He was appointed consultant at UCL Hospitals in 2014, collaborating closely with the endocrinologists, oncologists and radiologists to find the best possible result for his patients.

With a keen interest in teaching both at undergraduate and postgraduate levels, he is an Honorary Associate Professor at UCL, and currently holds the position of surgery lead for year 4 UCL MS. His current research interests include identification of novel diagnostic markers for early detection of thyroid cancer and the use ICG fluorescence for parathyroid identification and preservation in thyroid surgery."