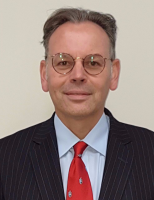 Mr Clive Aldrich DM, FRCOG has been a Consultant Gynaecologist and Obstetrician mostly based at the BMI Three Shires and Northampton General Hospital since 1999. After completing his undergraduate training in Wessex, he undertook specialist training in Obstetrics and Gynaecology in London at St George’s and University College Teaching Hospitals and then Oxford University.

He completed his MD thesis and advanced training in London and Toronto and continues to be actively involved in research, lecturing and publishing medical texts for both the scientific community and the general public. He now also holds an honorary consultant post at the John Radcliffe Hospital Oxford, Department of Obstetrics and Gynaecology.

In addition to providing a broad general gynaecological practice (including keyhole surgery) and gynaecological ultrasound. Over the years he has also developed a specialist area of expertise in the medical and surgical management of women’s pelvic floor and urinary problems (urogynaecology). He is also able to offer some private obstetric care and has had advanced training in obstetric ultrasound and maternal/fetal medicine. He also offers NIPT (harmony) tests and Nuchal Translucency tests as well as Gender scans, all with a fast results service.

Provision of “one to one care” for his patients is central to Clive’s practice and he works closely with a network of colleagues to ensure that the highest standards in Womens Healthcare are achieved.