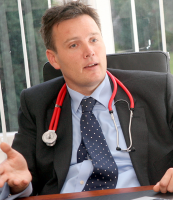 Guy is cardiologist with as special interest in echocardiography, cardiac imaging, heart valve disease and general cardiology. He is the clinical director of cardiac imaging for the Barts Heart Centre responsible for cardiac imaging across five London hospitals which, in addition to St Bartholomew's Hospital, includes University College and the Royal London Hospitals.

He qualified from the United Medical and Dental Schools of Guy's and St Thomas' in 1991. His post graduate Education was in a variety of Hospitals in the south east of England based around Guys and St Thomas'. He undertook a period of clinical research under the supervision of Dr Graham Jackson at Guys Hospital and was appointed Consultant Cardiologist to Eastbourne District General Hospital in 2002. In 2015 he was appointed to establish the echocardiography unit for the new Bart's Heart Centre.

Guy has a large research interest in echocardiography, stress echocardiography, valvular and structural heart disease. He has a large personal research portfolio and works collaboratively with a variety if researchers at Barts, across the UK and internationally. He is and honorary senior lecturer for both UCL and Queen Mary’s University of London.

He sees private patients for The Cardiac Clinic at both London Bridge Hospital and The Harley Street Clinic. He also sees patients for consultations and tests at Barts, The London Heart Centre and at CVS healthcare in Eastbourne.