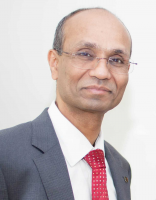 I am an experienced general and vascular surgeon and work as a consultant at West Hertfordshire Hospitals NHS Trust. I also provide services as an honorary consultant at the Harefield Hospital. I have been actively involved in the establishment and running of multi disciplinary diabetic foot services at West Herts.

After initial specialty training in India, I undertook further training in the UK in general and vascular surgery, mainly at The Royal Free Hospital, Hampstead, London, and was awarded FRCS by the Royal College of Surgeons of Edinburgh in 2012. I have been working as a consultant surgeon for over 9 years. I am actively involved in teaching medical students, undergraduate surgical lead and an honorary associate professor of surgery. I am an educational and clinical supervisor, a clinical skills trainer and assesses vascular trainees of London & KSS deaneries and an instructor for ATLS course.