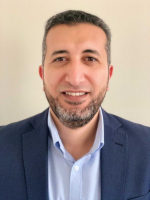 I am a Consultant Cardiologist and Electrophysiologist who has worked in cardiology since 2005. In June 2014, I was appointed as a Consultant Cardiologist at the Ain Shams University Hospitals in Egypt. Since 2016, I moved to the UK with my family. I finished a 2 years advanced fellowship in advanced cardiac electrophysiology and complex devices at Royal Brompton and Harefield in London. I got a consultant post at Glenfield Hospital, Leicester in February 2019. I studied Master degree in Cardiology and awarded the degree in 2009. In 2014, I was also awarded a PhD from the Ain Shams University, Egypt after a period of dedicated research in the field of cardiology. I have received extensive training in both general cardiology and cardiac electrophysiology at Ain Shams University hospitals in Egypt as well as at Royal Brompton and Harefield hospitals in London having successfully completed a two year fellowship in advanced cardiac electrophysiology and complex devices. I am one of the very few cardiologists in the UK who have European accreditation in both cardiac electrophysiology and devices after finishing the required exams and number of cases required by European Heart Rhythm Association.
I see private patients both at Nuffield hospital Leicester and Spire Nottingham, treating adults and teenagers aged 16-17.
As well as general cardiology, my specific areas of interest are palpitations and heart rhythm disorders, radiofrequency ablation procedures, atrial fibrillation ablation, ventricular tachycardia ablation, pacemaker implantation, defibrillator implantation, cardiac resynchronisation therapy (biventricular pacing) for heart failure and the assessment of sudden cardiac death risk. I have established a new technology of physiologic pacing called conduction system pacing at university hospitals of Leicester. This is considered the newest technology in cardiac pacemkers to provide a near normal heart activation. I am conducting research in that field as well.
I perform over 250 procedures per year which include the following:
Pulmonary vein isolation (AF ablation) for paroxysmal and persistent AF and VT ablation with using 3D mapping systems.
Radiofrequency ablation for atrial flutter, atrial tachycardias and SVTs.