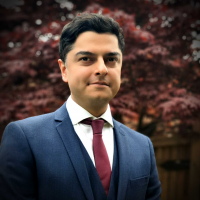 Mr Al-Dadah is a Consultant Specialist Knee Surgeon dealing exclusively with the knee, receiving referrals for a variety of complex pathologies. His current practice is in Kingston and the South West London Elective Orthopaedic Centre, the largest joint replacement centre in Europe.

Mr Al-Dadah has expertise in the full range of knee pathologies, from sports injuries, such as meniscal tears and ACL ruptures, to the complete repertoire of knee replacement surgery, including partial, total and revision knee replacements.

Mr Al-Dadah graduated from The University of Sheffield School of Medicine. His surgical training was in the prestigious Imperial College London, Higher Specialist Training Programme, where he spent several years in London's leading hospitals, from complex tertiary referral units to major trauma centres.

He undertook his higher fellowship training in the highly competitive, and world renowned, Oxford Knee Fellowship. He advanced in sports knee ligament reconstructions, cartilage regeneration techniques and meniscal injuries, with a focus on rehabilitating athletes back to their pre-injury level. Mr Al-Dadah spent a year in the designing centre of the Oxford Partial Knee Replacement, working with the team behind the most used, and most successful partial knee replacement implant in the UK National Joint Registry. As a result, Mr Al-Dadah has a particular interest in partial knee replacements, leading to a rapid recovery and a more natural feeling knee. He has a unique experience in the development of patient pathways, with the majority of his knee replacements comfortably using stairs and going home the same day, just a few hours after surgery.

Mr Al-Dadah has a dedicated focus on enhanced recovery and aims to carry out all procedures in a single sitting, getting his patients back to their normal function as quickly, and as comfortably as possible. To achieve these results, Mr Al-Dadah uses up-to-date modern techniques and equipment, with the most tried and tested evidence-based procedures being the forefront of his practice. He has published several research articles in peer reviewed journals, and has presented his work both nationally and internationally.

Due to Mr Al-Dadah's experience and reputation, he has trained numerous doctors and surgeons over the years, passing on his expertise to colleagues within the field. He is a lecturer at Imperial College London, is the founding director of postgraduate courses, and is regular invited faculty in numerous teaching programmes. Mr Al-Dadah has won several awards for his teaching, and is a Fellow of the Higher Education Academy. As a result, he utilises these skills to pass on knowledge and educate his patients fully regarding their pathologies, and empowers his patients to take ownership of what's happening following a thorough and insightful discussion. Mr Al-Dadah works closely with his team, but most of all with his patients and their relatives, to formulate the best long-term plan for their care.

Mr Al-Dadah is an Honorary Clinical Lecturer at Imperial College London and a Fellow of the Higher Education Academy. Due to his experience, he is regularly invited as senior faculty on numerous teaching programmes and seminars.

Please contact us if you would like Mr Al-Dadah to present at a course or seminar, and will be more than happy to work with you towards this.