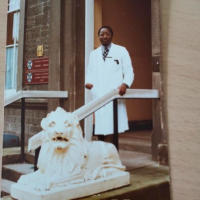 I qualified at Makerere University in Uganda in 1975 and went on to complete higher medical training attaining the degree of Master of medicine (internal medicine) in 1980, followed by training in the UK and acquiring the MRCP UK in 1983. I then trained in Edinburgh specialising in Gastroenterology and Hepatology.

Between 1984 and 1995 I was appointed Lecturer, then senior Lecturer followed by Associate Professor and finally Professor of Medicine at the University of Zimbabwe. During this time I was appointed to various committees and international organisations including working for the World Health Organisation as a Consultant on viral hepatitis and liver cancer. I was also a member of the International Task Force on hepatitis B.

I partially retired from the NHS in March 2017 and now work full time for Ramsay Health Care as a Consultant Gastroenterologist.