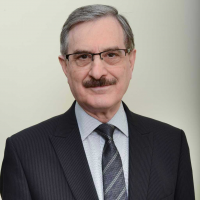 Emeritus Professor, Obstetrics and Gynaecology, School of Medicine Cardiff University. Previously, Head of the Academic Department of Obstetrics and Gynaecology, School of Medicine (2010-2013) and Senior Consultant in Gynaecology and Reproductive Medicine since April 1998. He qualified from the College of Medicine, University of Baghdad, Iraq in 1974, obtained his MRCOG in 1985 and PhD in reproductive medicine from London University in 1996. He finished his higher clinical training in obstetrics and gynaecology at the Royal Victoria Infirmary, Newcastle upon Tyne (1992-1994) and worked as a consultant at Gateshead Hospitals NHS Trust (1994-1998). Nazar's clinical interests have been in reproductive surgery and minimally invasive techniques and infertility. He has regularly supervised undergraduate and postgraduate (MD/PhD) students and was the Director of Cardiff University Ultrasound Masters programme for obstetric, gynaecological and medical ultrasound from 2004 to 2016. Nazar has been the local principal investigator of the United Kingdom Collaborative Trial for Ovarian Cancer Screening (UKCTOCS) and was a member of its ultrasound subcommittee.
He is a Non-Executive Director of MedaPhor Ltd., which has received university and national innovation awards for its virtual reality ultrasound training simulator. He has been the Ultrasound lead for the Welsh Deanery and a member of the Deanery’s School of Obstetrics and Gynaecology training committee (2001-2016), was a member of the Royal College of Obstetricians and Gynaecologists Specialist Training Committee (1999-2002), and the RCOG Welsh Executive Committee (2003-2010). He was the founding President of the British Society for Gynaecological Imaging.

I am currently full time in Private Practice