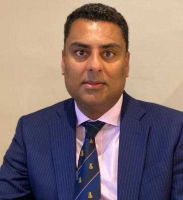 Mr Roy Gurprashad is a dual trained adult Consultant Upper GI/General and Paediatric Surgeon at the Luton and Dunstable NHS Trust. He has a specialist interest in General Surgery of Childhood and adult gallbladder disease.

Mr Gurprashad qualified as a doctor from King’s College London, School of Medicine and Dentistry in 2001. He completed his MRCS in 2005 and became a Fellow of the Royal College of Surgeons of England FRCS Eng in 2017. He additionally holds a BSc in Physiology from King's College London and an MSc in Surgical Technology in 2012, from Imperial College London. His basic and higher surgical training was undertaken on the prestigious Cambridge rotation. He has specialist training in Hepatobiliary and Pancreatic (HPB) Surgery, completing his Senior Registrar training at King's College Hospital, Institute of Liver Studies, under Professor Nigel Heaton.

Mr Gurprashad is the Lead for Paediatric General Surgery for the Luton and Dunstable NHS Trust and an Honorary Consultant at Great Ormond Street Children’s Hospital. He is a member of the children’s board and Chair of the Children’s Steering Group.

Mr Gurprashad has been published in peer review journals and is a GMC recognised trainer. He is actively involved medical education and supervision of junior doctors.