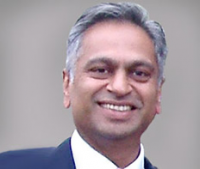 Mr Kalpesh S Patel is the founder and director of the London ENT Clinic. Mr Patel grew up in Highbury, having arrived from India at the age of four. He attended Highbury Grove School and having an early ambition to be a surgeon, gained a place at St Bartholomew’s Hospital Medical College in London. As an undergraduate, he was awarded the Sidney Scott Prize in Otolaryngology (Proxime Accessit). He qualified as a doctor in 1984 and began his surgical career teaching anatomy and physiology at the University of St Andrews in Scotland.

Following junior training posts in general surgery, neurosurgery and plastics, Mr Patel completed his higher surgical training in all aspects of ENT surgery initially at King’s College and subsequently at the Royal Marsden and St Mary’s Hospitals in London. Mr Patel was appointed Consultant ENT surgeon in 1995 at St Mary’s and Ealing Hospitals.

Kalpesh Patel has developed a sub specialty interest in nasal and sinus surgery. He was the first President of the British Society of Rhinoplasty Surgeons.

Past President of the British Society of Rhinoplasty Surgeons.

Over 30 other papers published in various journals

Frequent lecturer in ENT subjects to GP's, students, and nurses.

I have reviewed my last 5 year audit of septorhinoplasty and rhinoplasty procedures and I have a revision rate of 6%. this includes patients who have had previous surgery by others before my intervention.