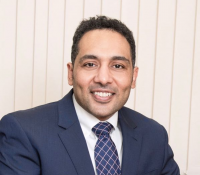 Hosaam completed his medical education at the University of Liverpool and finished vascular training in the West Midlands. He has extensive vascular training and research experience, having been awarded the British Society of Endovascular Therapy fellowship and a doctorate in vascular research from St. George’s, University of London. In 2016, Hosaam was appointed as Consultant Vascular and Endovascular Surgeon at University Hospitals Birmingham where he is now also the audit lead.

View external photos of my work