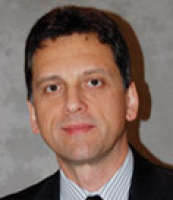 Dr Stephen Motto is a Sports and Musculoskeletal Physician in London Bridge Hospital. He completed GP training in 1988 and moved into Sports Medicine in 1989.
Dr Motto worked with the British International Rowing Teams from 1992 to 1999, and was part of the medical team in the holding camp for the 1996 Olympics. He held posts until 2003 at the British Olympic Medical Centre at Northwick Park Hospital, and in the Dept.of Musculoskeletal Medicine at the Royal London Homeopathic Hospital.
Dr Motto was a sports physician at the London 2012 Olympics, acting as a Games Maker at The Royal Holloway Uni Polyclinic, treating canoe sprint and rowing athletes together wth their support staff.
His particular interests include the diagnosis and management of exercise-induced lower limb pain and the use of shockwave therapy in tendinopathies.