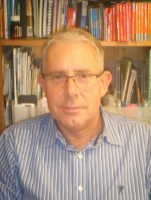 I trained at the University of Leicester. After house officer posts I worked in the Royal Air Force initially as a General Practitioner and then as a surgical trainee. My higher surgical training was in Northwest Thames and I was appointed as a Senior Lecturer in Trauma and Upper Limb Surgery, initially between the Royal Postgraduate Medical School, Hammersmith Hospital and Central Middlesex Hospital, London. I was the British Elbow and Shoulder Society Travelling Fellow in 1998 and have remained in the NHS working for Imperial College Healthcare at Charing Cross Hospital, West London.
In the last 10 - 15 years my work has almost entirely centred on upper limb surgery and particularly to all common conditions around the shoulder and elbow. I have a special interest in Arthroscopic Surgery, particularly for frozen shoulder, rotator cuff pathology and instability. I actively lecture and teach surgical colleagues as well as General Practitioners and allied professionals. I am a part of the Faculty of Examiners for the Royal College of Surgeons at Edinburgh and take an active part in post-graduate training.