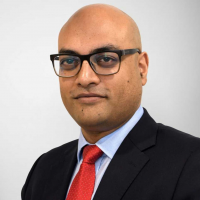 Prakash is Consultant Vascular Surgeon at Guy’s and St. Thomas’ Hospital NHS Trust and Clinical Senior Lecturer at King’s College London. Prakash studied medicine at the United Medical & Dental Schools at Guy’s and St. Thomas’ Hospitals before completing his higher surgical training in London and the South East. During this time, he was awarded the prestigious NIHR Clinical Lectureship in Vascular Surgery at St. Thomas’ Hospital, which provided him with comprehensive training in both open and endovascular techniques for the treatment of arterial and venous disease. It also helped him to develop his specialist interest in deep venous reconstruction and complex venous surgery for patients with post-thrombotic syndrome, recurrent varicose veins, leg ulceration and vascular malformations. Prakash completed his training at the St. George’s Vascular Institute in aortic surgery before carrying out a specialist fellowship at the Royal Prince Alfred Hospital, Sydney, Australia.

Prakash is considered a world leader in venous disease and has a nationwide referral practice that has included athletes afflicted by thrombosis. He previously sat on the research council of the American Venous Forum and regularly lecturers and runs workshops across the globe on the latest surgical techniques to treat vascular patients. Prakash has been awarded a number of research grants from the Royal College of Surgeons, The Circulation Foundation, the Wellcome Trust, The Academy of Medical Sciences and the British Heart Foundation, which has led to over 50 publications and the development of innovative technologies to help treat his patients. For this work, Prakash has received prizes from the Vascular Society of Great Britain and Ireland and the American Heart Association.

Prakash lives in South London with his wife and three children and is a fan of rugby and motorsports.