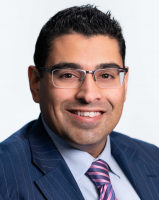 Mr. Sacheen Kumar is a Consultant Upper Gastrointestinal (GI) Surgeon specialising in the treatment of Oesophago-Gastric Cancer, GIST tumours and benign Upper GI conditions. He is also Honorary Clinical Senior Lecturer in the Division of Surgery at Imperial College London and Team Leader for the Upper GI Surgical Oncology Research Group in the Division of Radiotherapy & Imaging at the Institute of Cancer Research (ICR).

His postgraduate research was focussed on breath analysis for the early diagnosis of Upper GI cancer. He was awarded his PhD from Imperial College in 2014 and was subsequently appointed to the position of National Institute of Health Research (NIHR) Clinical Lecturer in Surgery. During his lectureship, he was awarded CRUK postdoctoral funding and supervised several PhD & MSc students. In recognition of his original scientific research, he was elected a Member of the Royal Society of Chemistry in 2018.

Further details of Mr. Kumar's research interests can be found at:
https://www.researchgate.net/profile/Sacheen_Kumar3