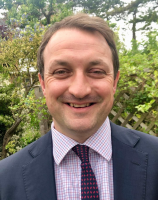 I was appointed as a Consultant General and Colorectal Surgeon at Royal Hampshire County Hospital in 2017 and also practise at BMI Sarum Road Hospital and the Wessex Nuffield Hospital as part of Wessex Colorectal.
I graduated from the University of Edinburgh in Physiology in 2002 and then Medicine in 2005. I completed my general surgical training in Wessex during which I researched Crohn's disease gaining a MD Res from University College London in 2015. I became a Fellow of the Royal College of Surgeons of England in 2016 and spent time with my young family volunteering as a surgeon in Malawi prior to taking up my consultant appointment.
I provide services for treating colorectal cancer, inflammatory bowel disease & complex proctology. This includes novel treatments such as radiofrequency ablation treatment of haemorrhoids, Rafaelo, and minimally invasive treatment of fistula in ano, with LIFT and VAAFT and pilonidal sinus using EPSIT. I also perform colonoscopy, laparoscopic hernia surgery and minor general surgery.
I have an interest in robotic surgery and underwent a preceptorship in robotic surgery at the Cleveland Clinic, Ohio. I have a particular interest in developing innovative techniques and improvements in practice and I was awarded a NHS clinical entrepreneurship in 2017.
In my leisure time I enjoy spending time with my wife and four daughters (including twins) and can hopefully be found either indulging in watersports, on a sports field or up a mountain.