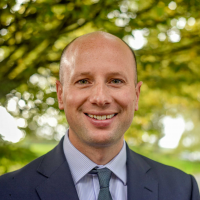 Andrew was raised in Surrey and graduated with honours from Sheffield in 2007, achieving a first class honours BMedSci degree investigating the role of angiogenesis in colorectal cancer.
Core surgical training was undertaken in London where his role as an Academic Clinical Fellow at Imperial College enabled him to help develop the use of eye-tracking technology in surgery. Higher surgical training was spent in the Kent, Surrey and Sussex region and in 2015 he was awarded the Keith Yeates gold medal for the outstanding performance in the FRCS (Urol) exam. He won the best presentation at the South Thames regional meeting in 2012, 2013 and 2015 respectively.
Post-CCT he undertook a highly sought after Fellowship in uro-oncology, endo-urology and reconstructive urology at the Royal Adelaide Hospital, South Australia supported by an Ethicon Foundation Fund award and the Urology Foundation. He gained accreditation with the DaVinci Xi robotic surgical platform and had a fantastic year. He returned to take up his Consultant post at Frimley Park in March 2018 where he is developing a special interest in reconstructive urology.
Andrew has written a number of textbook chapters and published and presented widely. He maintains a strong commitment to education and training, has held two formal anatomy demonstrator posts in Sheffield and London respectively and is a contributor to surgicalteaching.com. His training means he is comfortable managing all aspects of male and female urological problems and is also happy to consult on paediatric foreskin problems.
In his spare time Andrew enjoys spending time with his wife and young family, the Parkrun, swimming, golf, tennis, and travelling.

In 2015, Andrew was awarded the Keith Yeates gold medal for the outstanding performance in the FRCS (Urol) exam. He won the best presentation at the South Thames regional meeting in 2012, 2013 and 2015 respectively.

Always happy to come and speak to GP's in their surgeries and also speaks at events organised by Spire and BMI Hospitals in the Surrey area.