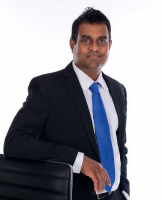 Mr Gnanachandran is a consultant gynaecologist working at Northampton General hospital and BMI TSH.
He does provide TP consultation for selected patients.

1) gynaecology scan such as TAS, TVS, 3d for gynaecology and HyCoSy, scanning and ovarian cyst assessment for cancer and benign conditions. Currently, he is the only person nationally to offer 3D TVS for fibroids and uterine abnormality, HyCOSY for tubal patency and IOTA/ adnexal model assessment of ovarian cyst for risk malignancy.

3) laparoscopic hysterectomies including patients with endometriosis, fibroids and early endometrial cancer; he performs around 90% of hysterectomies laparoscopically. (laparotomy mainly if MRI/MDT indicates for large fibroids unable to exclude malignancies/ and morcellation related risks)

6) Colposcopy and treatment of Cervical precancer and early cervical cancer. He is an accredited colposcopist. He follows National cervical screening and Local Guidelines to avoid unnecessary treatment but provides appropriate treatments.

Colposcopy and treatment of Cervical precancer and early cervical cancer

Chellappah Gnanachandran- Clinical Educator of the Year
"Mr Gnanachandran is the epitome of an excellent clinical educator. In the days of increasing pressure on theatre lists and reducing time for training he always finds a way of turning each experience into an educational opportunity. He trains juniors both surgically and medically and is constantly supporting junior doctors to participate in research projects. He facilitates friendly debates and learning."

3) Abstract: Review of current evidence on investigations for postmenopausal bleeding by transvaginal scan followed by hysteroscopy: Gap in clinical effectiveness

View external photos of my work