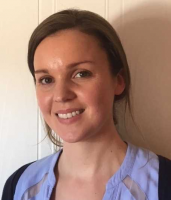 Melissa qualified with a Masters of Chiropractic from the Welsh Institute of Chiropractic in South Wales in 2010.
After graduation Melissa spent three years in South Yorkshire where, along with developing her knowledge of chiropractic and patient management she was able to get involved in the treatment of injured service men and women. Treating patients with complicated trauma like amputation and brain injury and seeing them improve has given Melissa respect for how amazing the human body is, and how chiropractic care can help to improve its abilities further.
In 2011 Melissa was presented with the Graham Heale award for the 2010/2011 provisional registration training scheme (PRTs) candidate of the year. This is a very special award as it was set up in honour of the late Graham Heale, a very well-respected individual both within and outside of Chiropractic communities.

Melissa is always keen to expand her knowledge of chiropractic to ensure she brings the best care to her patients. She has undertaken the Certified Chiropractic Extremity Practitioner (CCEP) course, to expand her interest in biomechanics of the extremities and their role in back and neck pain.

Growing up in Gloucestershire, Melissa spent much of her childhood in the outdoors, which has influenced her to take an active role in her health and wellbeing.

Melissa is registered with GCC and a member of the BCA.